LETTER TO THE DRUIDS OF EUROPE

All of us, from the different perspectives given to us by our diverse Traditions, fight for the dignification and respect of our Druidic beliefs, always from our differences, and respecting these differences.

That is why, from the Orden Druida Fintan (Fintan Druid Order/Druuidiacto Rectos Uindonnos), and more specifically from its Religious Association, legalised through its inscription by the Ministry of Justice of Spain, we want to warn all of you of the existence of a character, who not only passes himself off as a Druid consecrated in France, but also performs interventions, everyone of which are grotesque eyesores that offend the Druidism.

This character we are speaking about is Mr. José Luis Fernández, who in the Druidic ambit/environment makes himself be called José Luis Nuag.

Mr. Nuag auto proclaims himself Druid (although he says he was ordained in an occult/esoteric secret Breton/French order, but then nobody know about this order). Around the year 1995, he reunited a group of people, supposedly to initiate them in Druidism. This meeting originated the so-called Orden Druida Sendero Verde’ (Green Path(way) Druid Order).

The liturgical fundaments of the aforementioned “order” were based in the undue appropriation of the Rites of different orders (rites that appeared in a famous book by Michel Raoult), in order to sell them to his “initiates” as belonging to the arcane Tradition of Mr. Nuag himself.

If there is something that unites us all true Druids, it’s the fact that we reject lies. Truth and honesty are an intrinsic part of our Priesthood.

That’s why our accusation/complaint/denunciation goes beyond the polemic about the fact of whether someone has the right to be considered a Druid without having being ordained by a recognised Druid Order. It goes beyond lines and filiations, directly to impact the nucleus of the sacred. We understand that, even though priestly irregularity is something unacceptable for us, other Orders think differently about this matter. But, apart from this issue, they too must believe that, over and above these “naturalization documents”, there exist certain ethical bases that are the foundations of our priesthood and dignify it, and that are undeniable/inalienable.

There are some things that are totally unacceptable, totally intolerable, dirty and despicable: Lies and .scams/frauds in order to get economic benefits, and, ultimately, to act with falsehood towards people that you initiate, who believe in you, that appreciate you and give you their friendship, and, in exchange, you tell them stories that even you don’t believe, or, worse, are conscious of their falsehood; and you don’t stop to think, or you don’t care, about the damage that you cause by doing this.

We know there are many self-pretended Druids, that call themselves that only in order to be able to “raise a business” that will allow them to live comfortably, profiting from the good faith of their clients, lying to them and scamming them.
If this was the case here, only another “astute” character trying to cheat gullible persons, it wouldn’t be of such importance to us, and we wouldn’t be writing this letter or bothering you. But we believe that the case of Mr. Nuag goes beyond all this, and it directly vexes our beliefs, compromising the seriousness of Druidism, not only in Spain, but in all Europe, if he finally gets the necessary supports that he is looking for and hopes to get beyond the Spanish frontiers.

As we were saying, this person, who doesn’t deserve to be considered a Druid, has recently gone to several radio station, esoteric fairs, or “witchy”/wiccan meetings, performing extravagant/eccentric rituals, which are totally vexing towards Druidic spirituality, whether one considers this as a religion or not.

After discovering lately the lies and deceits of this man towards his initiates, and after learning that no affiliation of any kind exists for him or his “Orden Druida Sendero Verde” (Green Path(way) Druid Order), we have been informed that he is presently seeking legitimacy for his false Druid Ordination among different Druidic groups in France and Germany; he wishes to establish contact with them in order to get the reconnaissance that he doesn’t/can’t get in our country, due to his improper actions

With this letter, we don’t wish to impose our vision to anyone, nor to force their decision. Everybody is free to act according to their will, and to assume the responsibility for their actions. This letter, then, must be understood as simple real information about who this person is and what are his “merits”. Because we don’t want more of our brothers (from other countries, this time) to feel deceived, frustrated and hurt, in time, by having placed their confidence in a merchant, who only seeks his economic subsistence, and, in order to get it, he doesn’t care who he has to sell/betray, which deities he may offend, or how many Believers he must humiliate.

In the following links, one can appreciate the “quality” of his interventions: 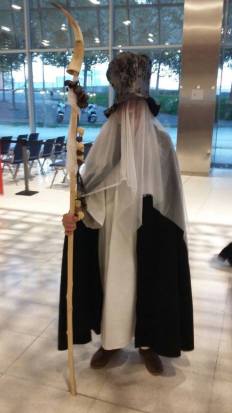 We belong to a Religious Association recognised by the Spanish State itself, feel the Druidism as a religion with full rights, we are proud to perpetuate the Orthodox Tradition received by our brothers of the Celtiacon Certocredaron Credima, and we are also grateful for the respect and love we received from other Orders, among them the Lemovica one, and we can never accept or recognise this kind of behaviour. And we would be very sorry to see that other serious Druidic Orders, brotherhoods and Alliances, because of the fact that they don’t know about this, give their reconnaissance and friendship to this person, who succeeds only in harming the public image of Druidism.

Thanks to all for your kind attention.